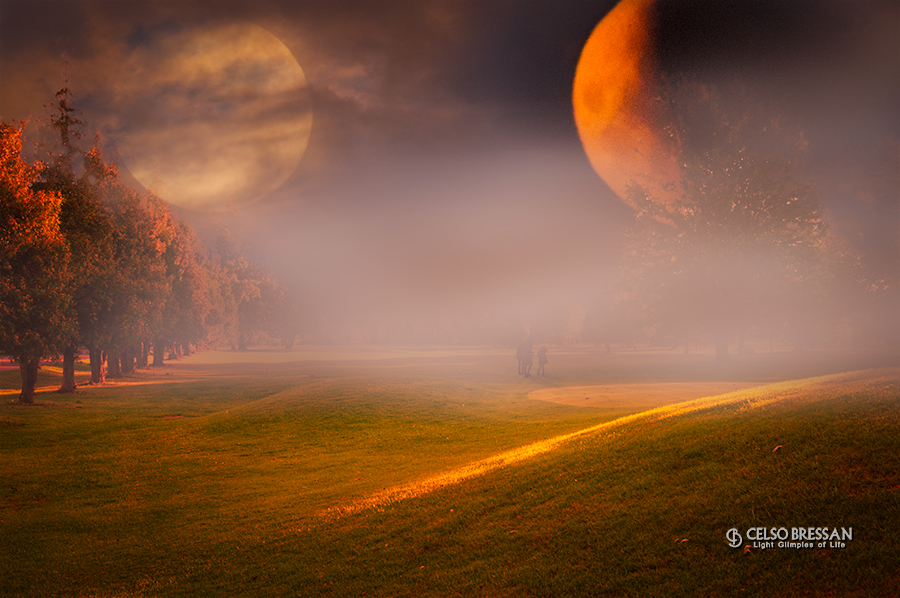 He was dying of old age and all the members of his family, present in the vast salon, knew it.

They were not there to mourn him with a torrent of tears, or to tell jokes about his life, or to have free meals. They were there because their mutual vibrations were going to help him to make a gentle transition. Their grave but serene expressions were bringing the balmy breeze needed on this occasion. At the right time, his lungs would stop breathing, and his heart would stop pumping the vital fluid.

On The Planet, days before death, one member of the family would go to the Department of Life and, using a personal vibration as identification, register the impending death and choose which kind of De-Materialization Procedure the family would like to undertake. By far, the Cosmic Ray would be the preference. A magnificent spectacle where a specially made casket, “tinted” with the vibrations of the family, would be thrown on a collision course to the uninhabitable and poisonous Second Moon by a very high altitude air carrier. The glory of this procedure would be to see a long trace of light with the colors of the family hit the moon, an event to be remembered forever by those in attendance. However, it would come with a hefty penalty, the downgrade of one step for each member of the family, in the Birth List, which would mean that the family would not be allowed to have a new baby in many years.

The casket already prepared and with his family at his side, the old man expired.

He was carefully arranged in the casket and, after the tradition of adding a personal object to go with the dead, a book with personal annotations was tucked under the pillow. Finally, all members of the family joined their hands to impress their mark on the casket and to seal it.

The next cycle of the Second Moon would see the Cosmic Ray of the family.

Except, it did not…

Contrary to all anticipation, clouds were covering the sky, and, precisely the moment the casket was being launched from the air carrier, a very rare coincidence happened: a tiny meteorite hit the casket parallel to its side with a strength not enough to cause any significant damage, but sufficiently strong enough to move the casket a few degrees of its intended course, and into the vast and open space for an endless voyage…

In their rare moments of relaxation, monks from an Abbey by the sea were walking by the shore when they found a well-polished oval object rolling back and forth on the waves. They had never seen such a thing before but were certain the Abbot would know what to do with it.

The object was placed on a table in the dining room with all the monks in silence, awaiting the Abbot’s movements. He circled the object, lightly touching all parts with intent. At some point, he stopped, sensed that part over and over, closed his eyes and sensed again. He then called the blind monk and directed his hands to that part too. They both worked there, moving their hands slowly until there was a hiss and the object opened in two. The monks stepped back with a gasp. Inside, they found a humanoid form resembling a dark puppet with rough skin, almost a monkey without hair. The form was contorted and tangled up in a disarranged white cloth. A book fell from the object.

He inspected the form without touching it and grabbed the book. Its dark pages were almost silky made of a material he did not know. The pages were dark and the text almost unreadable. He touched a page with closed eyes and handed the book to the blind monk. “Brother, can you read this book?” The blind monk sensed the pages with his fingers and, after some time, he replied, “It has text and drawings not familiar to me.”

“Do your best, brother!” said the abbot. “You read it and relay the ideas you understand to your brothers to transcribe.”

The Abbot closed the oval object and spoke to the monks. “Brothers, we have seen things that we have never seen before. They are strange, and we do not understand them. Perhaps, having the book translated might bring us the explanation for everything we have seen here, perhaps not. This task may take years to complete, and some of us may not even be here anymore to witness its completion. Therefore, I would like to ask you to keep your mouths shut, your eyes closed and your ears insensitive to anything we have heard here today. This creature does not seem to be human, although capable of writing. Still, it is not one of us and cannot be buried like we are. However, we can give it some dignity by placing it behind the stairs to the cave, at least while this monastery exists!”

The translation took nine years to complete with the blind monk dying of exhaustion shortly after that. The original was stowed away in the same niche where the oval object was stored, and the copy was arranged among other forgotten books in the library of the Abbey.

Years went by while the monastery slowly crumbled until it was eventually abandoned. Some of its few possessions were given away to people, while many of its books traveled through centuries and across countries, changing different hands along the way.

In 1912, Wilfrid Voynich bought a collection of old books that included one written in a mysterious language surrounded by even more strange drawings. This book, or the Voynich Manuscript, as it has been called since, was the subject of studies by many scholars who have been unsuccessful in trying to decipher it and understand its contents.