“Hi, Ron, remember me, Cratte, C-R-A-T-T-E, Cratte?”, without being invited, a man sits at the table where Ron was having dinner.

“You do! Actually, it’s the main character of your bestseller and a big movie that made millions for you”.

“It’s not a real person. It’s just a character in a story as you said”.

“Cratte is me. I am that character! Greg wrote that story based on my liking for mind games. I didn’t know, Greg was good in writing but timid. He created “The Great Cratte Story”, a fantasy about a famous diviner far more powerful than my abilities to do cheap tricks like moving forks one inch away. He, showed his story to you because he wanted to make some money for us. You promised to help him. Instead, you twisted the story and transformed me into a monster capable of destroying people with my mind. Your book was a success, but you never talked to Greg anymore. You stole his story! He was so devastated as he couldn’t prove anything against you”.

“In spite of that, Ron, he continued with me in our ridiculous show in filthy places. Nobody ever believed I was really moving those forks without using any hidden magnets. But, it was our show, Ron. Yes, our show because Greg was my brother and he’s now dead! After your movie was released, everybody later laughed at and made fun of our show because Cratte, in the movie, was capable of doing marvelous things and Cratte, in our show, could barely use magnets”.

Cratte caught the breadth again, face transformed, and continued, “Can you imagine, in the last days of our show, the rare spectators calling me “Cratte, the false?” He paused, in a broken voice. “When nobody wanted to see our show anymore, Greg told me about what happened to the book. The next morning, I found him hung in the cubicle we were living in. A note begged me to forgive him. Forgive him for what? Greg died because of you, Ron, and I will not let his memory vanish!”

Ron was starting to sweat, visibly uncomfortable with the conversation. The food was not tasting the same anymore.

“I don’t know how I survived in the following years, but I decided to improve my abilities. Do you want to see one of them”? Cratte looked at a knife on the table, and it moved swiftly to pinch Ron’s arm. He pushed it in a reflex, and the blade followed like a magnet.

Ron didn’t know what to do, just holding the little wound on the arm.

“Do you remember, Ron, how Cratte dies at the end of the movie?” Ron’s face expressed fear and horror. “Yes, Ron, you now felt the terrible fate of Cratte. All forks and knives at that banquet started pinching him until he died in a poodle of blood. And you created that monster, Ron! You invented his perverted acts just to have more prestige and money. But, I am not like that, Ron. I just wanted to perform my act with my brother Greg, Ron. We just wanted to have a decent life maybe with a family one day. It’s all gone now, Ron, thanks to you!”

Both men remained silent for brief moments, Cratte staring at Ron, which was looking at his arm.

“After all, your movie was inspiring and – guess what – Ron? I worked hard to learn how to make people do things I want them to do, just like Cratte in the movie. But, I kept it for myself, because it’s not good and I am not bad. However, I am going to make an exception, Ron, just and only for you. You are a privileged guy because this is going to be my first and last act of the kind and then the curtains will close forever for me”.

Cratte paused, stood up, gently arranged the chair back to the table, leaned closer to Ron and, in a low voice, said, “I am the Cratte from real life, and this Cratte is not bad, I insist. You must be happy with it as I don’t want your money. Enjoy life, Ron! Enjoy restaurants! Enjoy banquets and enjoy the beautiful company you have in memorable food events! Or, at least, while you can because your mind now has the Cratte Effect, Ron. It may take days, or weeks or even months for it to take full place, like a virus slowly contaminating your mind, Ron! Every time you would come close to forks and knives, your body will attract them, and they will pinch you. Nothing severe, nothing deadly, nothing like the Cratte in your movie. Can you imagine the inconvenience, Ron?”

Cratte prepared to leave, turned around and said:

“By the way, Ron, sorry to say, but I didn’t have time to practice a way to revert the effect and The Great Cratte, as of this moment, is retiring from the show!” 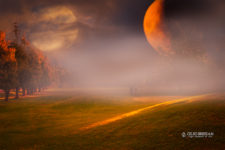