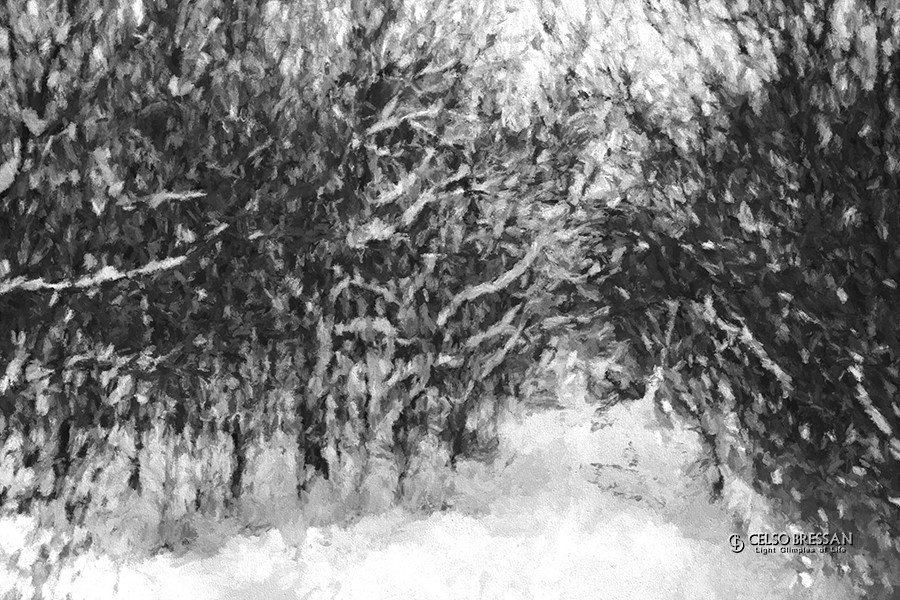 The Chief of Police shrugged his shoulders in resignation when one of his aides pointed at a piece of the uniform found. “From the other side!”. This finding would change everything and would bring a roster of complications for many people, especially him.

A few days earlier in this forest, a hiker tripped over a piece of metal that revealed to be, to his untrained eyes, the tip of a weapon of some kind. He immediately contacted the Police about the finding.

The war was already over for almost 50 years, and occasional discoveries were still happening on both sides. The inspector knew to investigate these episodes would be time-consuming and, sometimes, become a burden and a reason for protests, let alone interfering with the lives of people who were now living in these places. Many of time, when only small material evidence was involved, he just ignored the findings to avoid embarrassments and authorities confiscating the site. He then just exchanged an accomplice look to the residents of the place, put back all evidence and left without a word. He knew that these people were grateful to him and the History of this or any other country would not be harmed in any way.

However, he was facing a different situation because a human being was involved and he knew he would have to take some bureaucratic steps to go ahead with the case. First, he would have to fill out a detailed report with pictures and films about the finding. Second, this report would have to be sent to a select committee that deals with findings of the war. Third, this committee would have to get together to analyze the report, check for its validity to the war, weight in its political implications and produce another report that, fourth, would be sent to the counterpart committee on the other country. Fifth, this other committee would have to get together to analyze the report, check whether it would fit within the boundaries of its authority, weight in the political implications of the fact and the History of their nation. Eight, if the subject would be found positive and valid, this committee would reply suggesting a joint meeting to discuss the matter. Nine, when the joint meeting would happen, they would consider how to deal with the facts at the execution level. Usually, they would appoint someone close to the incident, the Chief of Police, to be in charge of the work while the other side would send somebody to act as an observer of the work. Unless explicitly defined so by the joint committee, in no way the expert would be authorized to touch anything; all work would be the chief’s responsibility all the time.

His appointment would be almost evident as he had already done this work in the past and not a single politician would spend the time on a cause that would not bring any accolades to his or her name. He knew the process would take at least two months in the most optimistic case. Meanwhile, he would be responsible for maintaining at least two guards, day and night, on the site to protect it from looters and protesters from both sides, mainly the protesters, some defending and some against the war. Not rarely, these protesters would clash with each other, and wounded people weren’t uncommon to be sent to hospitals. Fortunately, this forest was a bit away from the nearest city which meant the public wouldn’t be adequately fond of staying there longer. By the beginning of the work, the public interest in the subject would be already forgotten and, if any, there would be some news on TV and newspapers.

A month later, he removed one of the guards and shorter afterward, only placed a guard on the weekends to prevent occasional hikers from disturbing the site.

Three months had passed when he was informed that a university professor from the other side would arrive within two days to start overseeing his work at the site. He needed to carefully dig the site, collect all historically valued objects and separate them by country. Finally, they would have to write a joint report describing everything and explaining what happened in the place 50 years ago. If no disagreements would arise, he was expecting to work around three weeks with a foreign professor on his shoulders.

The professor was a gentleman and understood the problem they were involved. They both shared the idea of getting rid of the burden as quickly as possible by producing a report that would not cause significant impacts and let the corresponding war museums deal with the belongings found. They understood that war museums are there to show the salient facts of a nation at war and rarely presenting facts from defeats, everything carefully organized in shelves, glass protected boxes or large floors with heavy equipment. In war museums, all objects have the “HISTORY” label. And people would pay to see this history, but only a carefully selected part of them, the ones that would not shock the senses, mainly the ones displaying the pride of being a brave fighter or the satisfaction of technical achievements and readiness for the war. No personal sufferings or horrific moments of war are shown there. Instead, what war museums show is the ticket for the next battle as everybody there feels the pride of being at war.

The digging revealed that there was only one soldier there and that he died while holding the machine gun, probably when firing it as lots of empty shells were spread around. He died from a fractured skull caused by something thick like a large piece of log, judging by the hair crushed in the cracks of the bones, typically when skin, blood, and hair mix together.

If he was shooting, what was his aim? If there was a brief fight, maybe he could have scared away some enemies that gave up chasing him. Otherwise, with some dead bodies around, other people would have already found them long ago. Therefore, what was his aim again? They followed the possible path of the bullets up to an old root, the root of the tree that possibly fell on him. Around and at the root, they found several shells that matched the caliber of the machine gun. Why would he do this? Maybe, he wasn’t in his perfect mind anymore and started firing at imaginary enemies…

In the cave where he was living, there was a pile of small bones, mostly decomposed, indicating that he had eaten small animals from the forest. Scattered, heavily decomposed cans of military rations and blankets.

All indicated he lived there for two to three months, in the full Winter because he was wearing thick gloves and socks when he died. Perhaps, heavy rains that followed covered the cave with dirt and dead leaves. In some ways, he was silently buried in a tomb of the unknown soldier.

In fact, unknown he wasn’t because they found his documents in his pockets, very damaged by the time but his picture and part of his name were still recognizable thanks to a bronze medal pressing the place. Back to home, the professor would have to spend some time identifying him and finding his family.

Later that night, over a beer, they browsed through some books and found the medal of that kind was awarded in the battlefield for officers of the chief’s side. An embarrassing silence descended between the two.

“Look, chief,” the professor finally broke the silence, “a war-time is a tough time. In this minute, you might be getting a decoration only to lose your life a minute later, only because you are in combat in a war. I am sure that the same happened with my fellows too”. The chief motioned to interject, but the professor continued. “Ask yourself this, chief: Why this officer got the medal? By killing my comrades or by being injured by my comrades? We just don’t know what happened. He may have found the medal without actually killing anyone. Wars are dirty jobs played by people otherwise incapable of harming anyone. However, their minds become so twisted by the horrors they face that they end up impersonating themselves this horror. Machine guns, planes or tanks do not make the horrors a war make; people like you and me do them by intentionally pulling the trigger of these weapons. And the more natural we find these horrors, the more horrors we are capable of inflicting without feeling any pain or remorse. After the war is over, you and I start realizing what we did, and that’s when we fell trapped by guilt. That’s when we decide not to make any wars anymore. But, we eventually die, others start feeling that itch again, and we go to war over and over. We, as human beings, are so intelligent but we never learn from the past experiences. I am not surprised when I see the new generations of our countries already engaged in provocations”.

The chief was silent while gently rubbing the medal. “If I may suggest, why don’t you just bury this medal in the cave? We would never know the story behind this medal, but we know that it belongs to the battlefield just like the officer buried somewhere there”.

Work finished, all belongings collected, the report ready, the professor parted carrying back the story of a brave soldier that resisted, alone, against all the odds, the harsh times to defend his country and the values his country represented.