Day At The Office 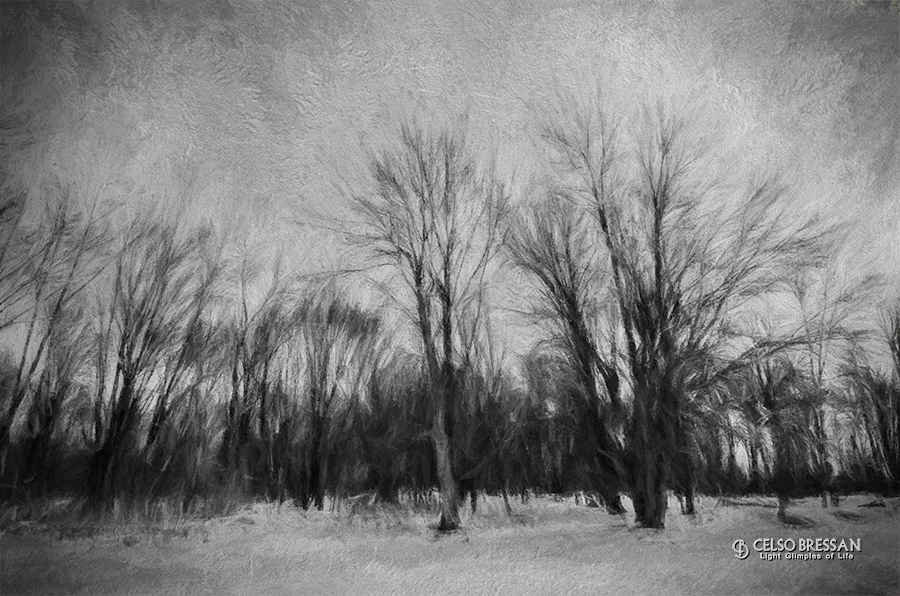 Day At The Office

“Another day at the office!”, I said to myself, just to shut my mouth off and stayed motionless, almost without breathing, checking for other sounds around. Nobody should know I am here, especially the enemy.

My “office” is a tiny cubicle dug under a rotten tree in the middle of some forest in harsh Winter where snow is recurrent. At one side, a bed made of pine needles to isolate it from the ground with several layers of blankets provided by my comrade soldiers. On the other side, several boxes of military canned food that was hidden there by the enemy. In the middle, I have just enough room to stretch my legs and crawl through the “door” of the office, a plain military canvas hardened by the cold, with pine branches on the side and on top to disguise everything.

The only to go out and come in is through the branches I have to replace every two or three days to give “my door” a natural appearance. Conveniently disposed of, big rocks help me to see the enemy without being noticed.

My country is at war with the neighboring country for I don’t know exactly the reasons. I don’t even know who declared war on whom as events in succession from each side escalated to small military actions until there was a fight at the border which led invasions from each front. Three years of killing, raping and destruction are already under the way, and both sides claim they were winning. All the cities around the border are suffering the most with constant bombings from the opposite sides. Occasionally, we swarm some city across the border and manage to place our flags in the tallest buildings of the enemy, preferably the churches so that we could show that our religion is better than theirs only to hear, hours later, rumors saying the enemy made the same with our churches.

Throughout the centuries, our countries were in constant ruses mostly because of the religion aspect but also because we spoke different languages, each side claiming its superiority over the other, each side arguing their pure lineage from great warriors that survived the times. Once, a teacher told us we were the same original people back in a forgotten past. His beliefs cost him dearly, though, as one day he stopped teaching and could be found collecting garbage on streets to survive.

As told by our History books at school, the last serious clashes happened more than 80 years ago with our cities burned to the ground and the lives of our patriot citizens taken in the wake of the destruction, when the other side invaded us for no good reason. Without hesitation, we had to retaliate and managed to defeat the enemy and win the war. Interestingly, I can understand the other language enough to read their History books recanting the same story…

And, now, we are at war again!

I am young, but I have already suffered and seen the suffering of others because I am on the ground, on the front facing the enemy and all sorts of destruction that I never imagined a war could bring. I am one in the front row seeing the terrified faces of the wounded children, of the women that lost their husbands, striving to keep the children alive while saving themselves from the enemy. I am one seeing destroyed houses and forced to destroy them as well. I am one trying to hide my emotions when I look at people hiding in the rubble, freezing to death in the cold weather. I am one seeing them scavenging for crumbs while we are marching on eating our military rations. I am on regarding old people left because they were not able to fight, dying like flies of starvation and cold. If a general would see and feel the same horrors and pain I feel and look for just one day, he would put off all the fight at once!

While the wind plays its eerie song through the trees of the forest, with my binoculars inspecting the far turn of the road for a possible arrival of some infantry, I murmur to myself: “Why? Why we destroy our bodies and our souls just to prove that we are better than our neighbors? What kind of supreme irony is when a priest, the representative of God, a person that is supposed to spread God’s word of kindness, perseverance and humility proudly blesses cannons and soldiers so that they could kill as many enemies as possible? What kind of humanitarian work do doctors that go to war when they cure the wounds of soldiers just to see them going to fight again to wound others and to get wounded over and over? What kind of moral has a wife to inspire a husband to go to war, knowing that this man will most probably rape other wives and know that other husbands could rape herself as well? What kind of courage demonstrates generals and officers, on top of their protected offices, when they cut the lives of promising young people by sending them to slaughter fields, all in the name of the bravery and pride of a nation?”.

All these “Whys?” led me to this frozen hole after I asked my ill-tempered and barely capable of leading officer about their responses. Some of my comrades pointed their fingers at me when I discussed these ideas with them too. Some shared my opinions, but their silence was revealing of the common sense of the mass of the population that didn’t want to go to war but were overwhelmed by the vibration of the warriors that raised the pride as the most significant reason for the risky move.

To punish me, this officer left me behind with the “courageous” purpose of observing the enemy movements. If I could see them coming down the road, I would have to crank the radio and tell the headquarters at once. “A special remind,” he told me, “do not use the radio unless necessary because the enemy might hear you and come after you!”. Indeed, a great “advice” to place me in total isolation in the middle of the snow. Before leaving, some of the “silent voices” tried to comfort me and left some amenities so that I would not suffer much like blankets, chocolate, magazines and whatever they could collect without putting themselves in danger. They even tried to make my office larger but, digging the ground in the cold with a small shovel is like braking a rock with the bare hands. One of the men opposing me left a machine gun as a token of his “solidarity.” “What kind of solidarity was that,” I thought. “He was only willing to drop off the heavyweight from his shoulders!…” “Besides, the machine gun takes so much space that I can barely squeeze myself against the wall to get to the door of my office…”.

Twelve days have passed and not a single movement from the enemy unless I was sleeping while they crossed my point of view. Soldiers in action make noises as they have trucks, horses and occasional talks. In the middle of the woods, it’s easy to hear different sounds when they happen. The almost constant snow may have disguised their tracks but, overall, I don’t think anything happened that I was not aware of. Twelve days of complete isolation with white all around pushing me to talk to myself, completely disregarding the code of silence that I have to keep to avoid the enemy if anyone would ever be able to hear me!

“Wait!” Something is moving behind a tree in front of me. I could see splashes of light snow like somebody crawling on the ground. My heart pulsates faster, and my hands look for a gun. I could feel the cold of the gun, colder than anything else with a promising heat as soon as I would fire some shots. I was frozen in place looking until I could see… Two pointy hears!…  “Oh! It’s just a hare foraging around…”. I have seen some of them and their trails here and there. After eating cold canned food for days, real meat would come as a gift from the gods. But, how to catch them? I can’t shoot them because the sound would attract the enemy; I cannot build a trap because the trapped hare could attract wolves as I also saw their tracks too.

“What the hell! I am in the middle of nowhere, with nobody around! Let’s see some action here!”. I got myself behind the machine gun and fired at will. I saw the bullets hitting the tree and the snow, together with the hare flying with red spilling from its ankle. “I did it!”, I cried. Then, just the silence was broken by a distant echo of the shots.

I stood motionless for extended minutes. No enemies, nothing moving, just the wind touching the branches and letting some snowflakes to fall off. Nothing else.

I finally came to my senses when my fingers started feeling the pain in contact with the cold metal of the gun. Cautiously, I crawled out the hole towards my victim, its eyes wide open as telling me it was not part of the war and had nothing against me. Part of its ankle was gone but, who cares? I went back and started peeling it before it would be freezing. “Tonight, I will have some real food!”.

“City nights are not true nights!”

With the growing fear of the dark and the potential dangers it can bring, streets, houses and all kind of places are adorning themselves with more and more light in the supposition that it would protect the citizens living in cities. A real fear or not, the fact is that cities make kind of cone of light at night that dims out the natural brightness of the stars and makes the sky much lighter. No wonder, in the outskirts of a city, the stars create awe impressing anyone not accustomed to a real night. “Pity that city lights do not protect the people from bombs and destruction…”.

Even the dimmest light in the middle of the woods would seem to be a lighthouse from a distance. Honestly, I wasn’t caring much about it anymore as I built a small fire within my office and started barbecuing the hare in small pieces with just a tad of salt and pepper that one of my comrades was gentle enough to them in my pocket. “Hmmm! Delicious!”. And I ate like a king!

In my bed, after making sure that there was no more fire to produce light and smoke, I was thinking how little things become so relevant when you are deprived of them. A friend or a parent is always there, and we don’t pay much attention to them. One day, they are gone and then we started to realize how much we have lost and how much we miss them. We have plenty of food available in the stores, so much that we don’t pay attention overeating or throwing out the surplus until something exceptional happens and the smallest grain of rice becomes important and a reason for a dispute. “That hare was my grain of rice tonight!”.

And I slept as I have never slept before in my life!…