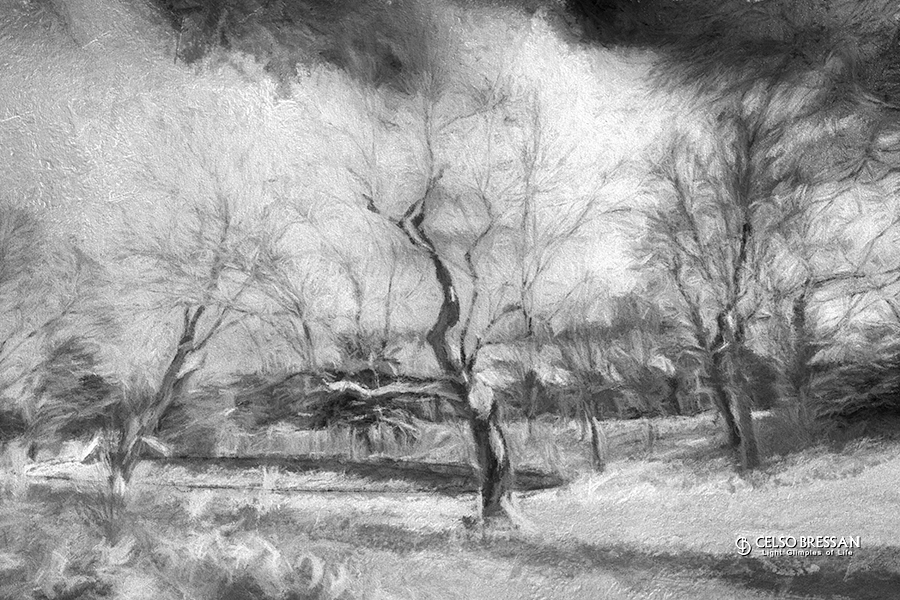 “Another day at the office. I don’t care anymore whether the enemy is going to hear me or not. I stopped counting the days, and I don’t remember when I first arrived at this hole. The hours go by very slowly with the snow and the wind witnessing my agony while I wait for the enemy to arrive. I already wish it comes to put an end to this agony”!

And I pull the trigger of the machine gun at an invisible enemy somewhere in front me.

“Take this, and more of this, you bastards! Come to get me if you can!”

I fire until I hear the mechanical emptiness of the gun. The sharp sound of the last bullets ricochet into the distance and come back as a long muffled blast.

Then, like the smoke of the shot disappearing into the air, the silence retakes place. Trees, birds and even the wind stopped to let copper and plumb flush out my anger and anxiety.

I listen and check all around. All seems to be quiet. Only snowflakes, rare ones, dare to fall from the branches and hitting the ground so gently as being afraid of breaking the importance of the moment.

I have no idea how long I stayed there, motionless, ecstatic, just being attentive to any strange movement and unfamiliar sounds.

Something moved behind a large tree way down almost on the road. It seems… “Finally, the enemy!” My chest was pounding, but I cannot tell it whether from fear or happiness. A soldier was walking among the trees in my direction. He took some steps and then hid behind a tree, looking around. On his shoulder, a long rifle with a telescope attached to it, indicating he was a sniper. I was frozen, afraid of making any move and risking to be seen or heard. The machine gun was empty, and my rifle was in the back of the office. I was defenseless, especially against a sniper. At that distance, it would be hard for me to hit him and I would become a trapped prey in my office!

He was alone and, as he was approaching my place, he moved to my right thus avoiding me but still acting as though somebody was watching him. “Does he know I am seeing him?”. Now, he was moving away from me. “Strange, no others around, just him. Is he lost too?”. Feeling safe to move, I decided to follow you after I quickly grabbed my rifle.

Leaving a cautionary distance and taken calculated steps, I took the same direction he was carrying, making sure that I was stepping precisely on his tracks to disguise my presence if he decides to go back.

At some point, while I was moving from one tree to another to stay concealed, he disappeared. Perhaps, he noticed my presence and was preparing an ambush. His tracks were leading to a tree. I stayed put, motionless, trying to control my heavy breathing, exhaling from time to time to relax. I looked carefully all around but didn’t see him. “I need to be alert as he’s going to get me soon!”

Still tight against the tree, I opened my senses for any signs of movement. Gradually, I was feeling more relaxed, and the pounding inside me was being replaced by the gentle wind bringing muffled sounds resembling geese grazing in the luxurious grass. I followed his steps again to the next tree, and the sounds became more and more familiar to people talking and laughing. “People openly talking and laughing in the war?”. The noise seemed to be soft with no fear as though the war was not posing any danger.

Slowly crawling on the snow, he approached the place where the voices were coming from. Down to a slope and over a large flat surface, gathered in groups around several bonfires, there were around 100 people of different ages, men and women of different armies, all wearing uniforms from his and from the other side, cheerfully chatting and laughing as though a war was not raging out there. There were no enemies, just friends. Although he forgot the binoculars at the office, he could see officers rejoicing with lower rank people. Here and there, couples holding hands, even from different countries!

The gathering seemed to be some sort of wedding, except the bride and groom were not there. People were drinking and politely eating small pieces of food taken from some neatly arranged tables on both sides of the field. Spaced here and there, benches for wounded soldiers to rest but none in critical condition nor displaying pain or blood, like they were already able to recover in a garden from a hospital but without the care of nurses. “How is it possible?”

At the trenches, to relieve the tension, stories were told, one about a widow that became a hero in his country when she avoided comrades of being ambushed by the enemy by yelling and inviting both sides for lunch under the condition that they should leave their weapons in the barn. The repast was frugal but energizing, almost in silence, until she directed them to take the guns but to leave in opposite directions. She was a hero in her own way but got no statue mainly because the other side also recanted a similar story in their own way. In fact, he wondered, humanitarians hardly get any statues because what they are doing is to display a sign of compassion towards the enemy and the enemy does not deserve compassion as, by definition, they are wrong and need to be killed. “A good enemy is a dead enemy”, I heard many times.

I was so absorbed by the scene and by my thoughts that I didn’t notice a pair of boots on my left. Trying to escape, there was another pair of boots at the right. “I was caught”! I moved slowly, fearing the worst, only to see a comrade and the sniper stretching their arms to help me to stand up. They were not carrying any guns. “Come, come with us, my friend!”, said one of them. “Enough with the war, enough with fears, enough with pain”!

I followed them down the slope to a table where they offered me a drink and delicious appetizers. While walking, everybody stopped talking and greeted me with their heads. Some even cheered me with their glasses! Others, discreetly clapped at my passage until a group close to a fire welcomed me.

I was now among friends and the war seemed to be over for me.