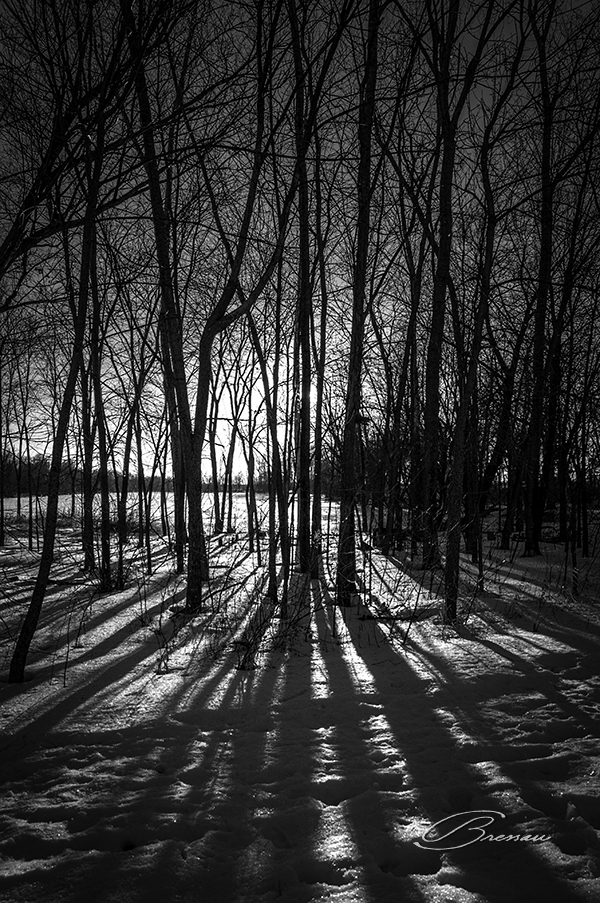 Interesting how our point of view can change from the scene we are looking at, the picture we take from that scene and its final processing stage.

This happened to me when I was strolling around with my wife at the end of the day on a park near a frozen river. At some point, I noticed the Sun being filtered by the naked trees and projecting nice long shadows, prone to a couple of photographs. Not longer, I had taken around fifteen pictures of this subject, both portrait and landscape, varying the exposure time, the angle… because I wanted to play with the subject at home by choosing the best shot.

According to my understanding, the best one straight from the camera (I just added my logo, in case you didn’t notice it) is this one: 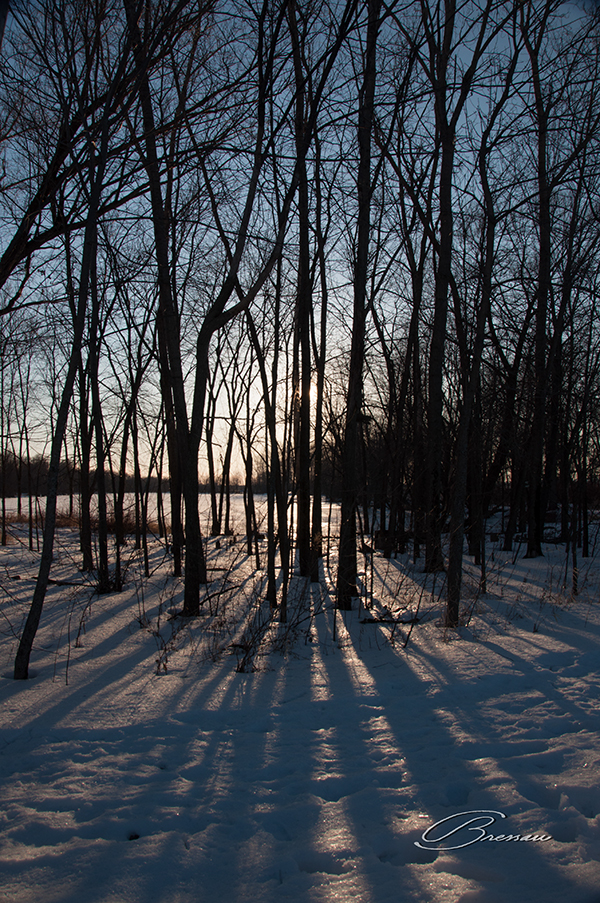 After Dark in the Woods – Original. 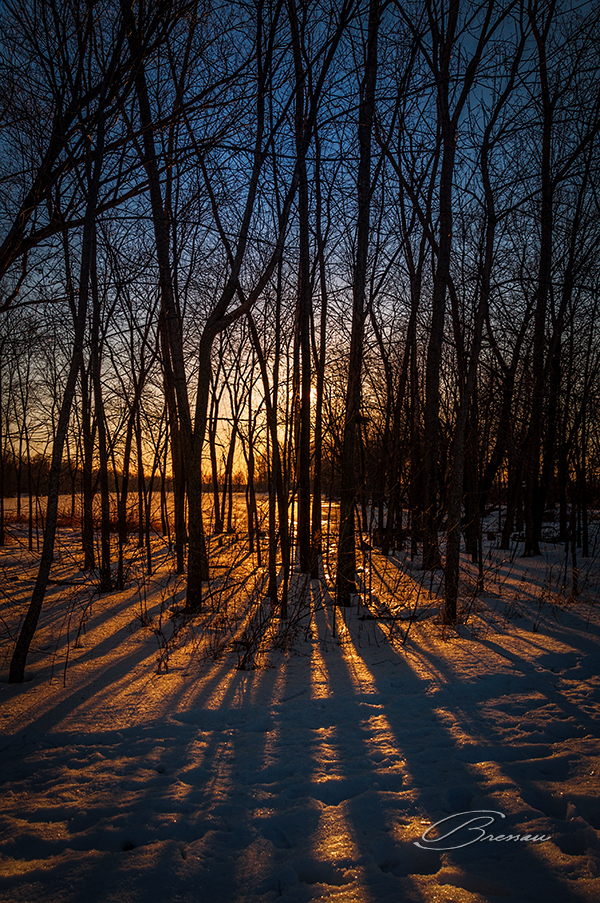 After Dark in the Woods – Color.

I worked this picture a bit by giving it just enough sharpening (very little, indeed), by enhancing the colors, specially the blue in the sky and that orange tang produced by the Sunset. The blue shadows were intensified and didn’t look very pretty even after reducing its effect. I intentionally left it darker than normal so that everything would match with the shadows that is, the overall light would just be a long shadow. The result seemed to be good so far. Take a look at it.

I decide to go a step ahead and play with the blacks and whites by fiddling the colors (doesn’t it sound strange to fiddle with colors in a black and white picture? See the explanation later) until I got the one shown up top.

Now, it has character and conveys a strong message. The Sun setting became a single and faded blob of light constrained by the dark sky. The trees and their long shadows completely dominate the scene and gives some chills in our spines. In essence, I was pleased with it!

There are a couple of lessons learned here, starting with the fact that I always shoot RAW no matter what (don’t beat me, I know that there are exceptions specially when you want to ship your photos immediately for further processing elsewhere). By shooting RAW, it gives me a lot of room to play with everything because, bottom line, a RAW picture is a picture left “as is” from the camera without any treatment like white balance, sharpening, etc. You do what you want to do, in the amount you consider the best.

The second lesson and perhaps the most important one here is that I never, ever, ever, ever shoot directly in black and white even in RAW for the same reason I don’t shoot JPEG. Contrary to the common belief, a black and white picture is not just a combination of blacks, whites and the various shades of grey.

Well – hmmm – yes! The after the fact image is indeed that.

This is exactly the reason I never shoot in black and white because the camera will take the decision for me when converting the original color image coming from the sensor to the output black and white image. The camera never knows what are my intentions nor what are the possibilities of fiddling with the various tones of reds, greens, blues, etc. This is a task that belongs to the artist within every single photographer.

Therefore, I shoot in RAW and color and then I play the sliders corresponding with the colors so that relationship between the various shades of grey gives me a pleasant after the fact black and white image. If I want, I could also produce many black and white pictures from the same original depending on my mood, the light of the day (yes, the light coming from your window can alter the way you see your picture in your monitor) and many other factors.

A final argument is that if I choose to ignore the blacks and whites, I can always use the original colors.